In celebration of #StarTrek50, our administrator on the real world impact of fictional characters Uhura and Sulu. pic.twitter.com/IFuUN5vrZQ
— NASA (@NASA) September 8, 2016

Posted by Unknown at 4:35 PM No comments: 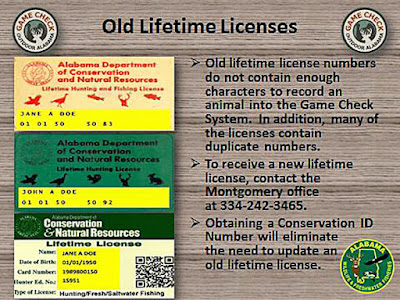 
- By DAVID RAINER
Posted by Unknown at 4:18 PM No comments:

Birmingham, AL— Conservation groups have filed a lawsuit in the U.S. District Court for the Northern District of Alabama against Drummond Company for violations at its Maxine Mine site, an abandoned underground coal mine located on the banks of the Locust Fork of the Black Warrior River near Praco, Alabama.

The Southern Environmental Law Center, Black Warrior Riverkeeper, and Public Justice filed the lawsuit to stop the continuous and unpermitted polluted discharges of acidic runoff and mine drainage into the Locust Fork and its tributaries. Besides being a continuous source of acid mine drainage, the mine waste has completely filled what was once a flowing tributary of the Locust Fork.

“We cannot allow pollution at the Maxine Mine site to continue at the expense of the health of the Locust Fork, its tributaries, and groundwater,” said Barry Brock, Senior Attorney at the Southern Environmental Law Center. “To protect downstream communities, wildlife and the recreational value of this important waterway, Drummond must take immediate and effective measures to stop the contaminated discharges at this site, once and for all.”

When mining operations at the Maxine Mine ceased, an enormous pile of mining waste was left at the site, as well as sediment basins full of contaminated runoff. As a result, mining waste and acid mine drainage have been illegally discharging from the site into the Locust Fork and tributaries through surface water runoff and seeps from the underground mine for years.

“The Maxine Mine site is one of the worst of hundreds of abandoned mines in the Black Warrior basin,” said Riverkeeper Staff Attorney, Eva Dillard. “Long after active mining has ceased, many of these sites continue to degrade water quality with unpermitted discharges containing high levels of sediment, heavy metals such as iron and aluminum, and other pollutants.”

To address the ongoing pollution and storage of coal mine waste on the Locust Fork, the groups are seeking removal of the mining waste, remediation and/or restoration of contaminated streams, and any other necessary measures by Drummond to stop the illegal discharges at the site.

“Acid mine drainage and runoff continues to threaten streams and groundwater in the area around the Maxine Mine site,” said Richard Webster, Environmental Enforcement Project Attorney with Public Justice. “Drummond has a responsibility to clean up the mess unleashed by mining operations at the site, and filing suit is an urgent effort to compel the company to take action now.”

Click here for an aerial view of acid mine drainage and polluted runoff from Maxine Mine entering the Locust Fork of the Black Warrior River (bottom left).  (© Nelson Brooke, Flight provided by SouthWings.org)
Posted by Unknown at 1:08 PM No comments:

Hell, even I'm not really sure what it is.